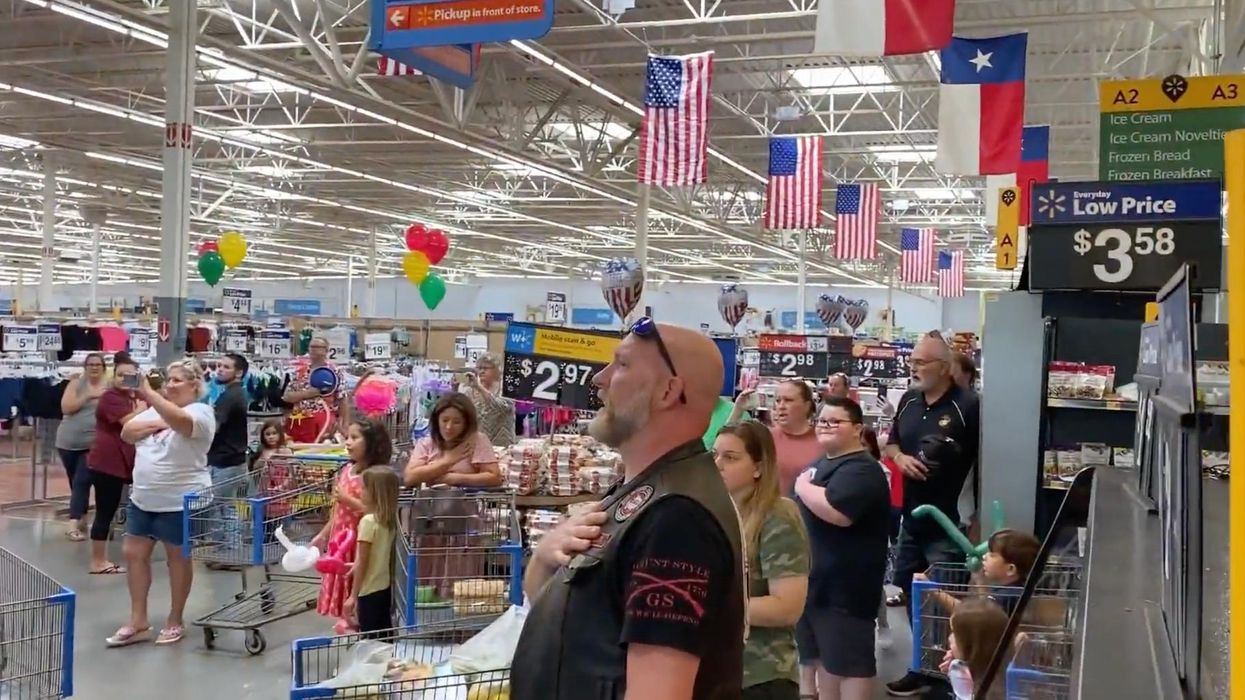 According to KTVT-TV, the singalong took place at a Walmart location in Haslet, Texas, on Saturday.

One eyewitness told the outlet that the impromptu chorus “was a very patriotic moment.”

“It brought tears to my eyes,” the witness added.

What are the details?

Newsweek reported that it all began when one smiling woman, her hand over her heart, began singing the national anthem as she stood underneath a massive American flag inside the store’s entryway.

Soon, other customers joined in, hands over hearts and some taking off their hats while singing along with the woman and their fellow Walmart shoppers.

Beaming customers inside then burst into raucous applause as the song concluded.

What else do we know about this?

The outlet cited a TikTok video that was captioned, “God bless Texas and God bless the USA!”

At the time of this reporting, the TikTok video in question has been viewed more than 1 million times and has received more than 178,000 likes.

Reaction to the viral video was mixed: Some believed it was the height of patriotism and American warmth, while others compared the performance and sense of pride too nationalistic and branded the behavior that of a “cult.”

One commenter wrote, “This is amazing!! We need to see more of this[.]”

Another added, “A to the MEN. You made an old vet cry with pride. God Bless the USA.”

“Proof the [sic] is still hope for our great country. Happy Fourth of July and to all proud Americans!” another commenter applauded.

Other TikTok users were not so gracious or approving.

One user wrote, “idk i got cult vibes lmao.”

“I’m getting North Korean vibes from this,” another commenter added.

Another complained, “This is top ten worst nightmare scenarios for me.”

99.5% Of People Killed By Covid In Last 6 Months Were Unvaccinated, Data Suggests

Cuban-American UFC Star Digs Up Old Photo of Kaepernick, Says ‘Cowards Like This Fool’ Should Be Sent to Cuba