After about a year of living in Kuala Lumpur, The Food Ranger has sadly left Malaysia.

Trevor James, the popular food and travel vlogger known as The Food Ranger, posted on June 28 a goodbye clip on his Facebook page and YouTube channel. In the video, James tells fans that he is on his way to Dubai, where he will be based next.

“I’m starting to get excited to get back into travelling and food ranging again … maybe slowly, judging by the way the world gets better,” he shared in the video, which begins with him arriving at the Kuala Lumpur International Airport. He took an evening flight to Dubai on Emirates, and flew on business class because he “… got a great deal on this flight.” (Currently, it’s RM8,216 for a one-way ticket, but James has reached out to us to say that he managed to get it for half the normal price – a steal indeed!)

He revealed in the video that his wife Ting (Xie Chuiting) and their Corgi, Muffin, are still in KL, and will only be joining him once he finds an apartment in Dubai and gets everything ready for his family.

The clip also sees him eating his final serving of nasi lemak, which he got from the Emirates Lounge at KLIA.

“It’s quite a sad moment. My mouth is just alive with Malaysian flavour(s) right now. It’s gonna be quite a while before I can have it again,” said James, while savouring each mouthful of nasi lemak. 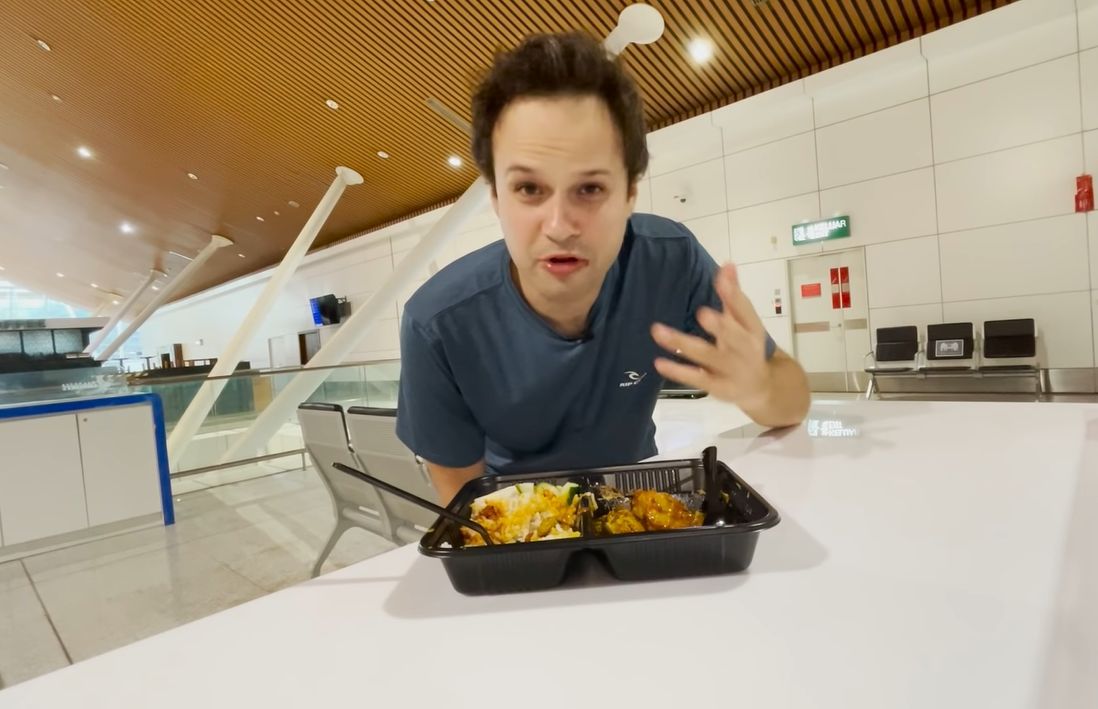 James enjoying his last ‘ta pao’ of nasi lemak at the KLIA.

The vlogger and his wife moved to KL in 2019 under the Malaysia My Second Home Programme. Though he managed to do many videos on food destinations in Malaysia, there are still plenty of places that he has yet to cover.

Unfortunately, with the pandemic came travel restrictions, and as The Food Ranger, James’ work mainly revolves around travelling. Presumably, the travel ban has hindered James from creating as many videos as he would like.

This is a blow to Malaysia as The Food Ranger’s videos, which usually clock in millions of views on YouTube (his video on Malay street food in Terengganu alone has 3.9 million hits!), can indirectly help to boost our tourism industry. If you look at the comment section on any of his videos about Malaysia, there are always people from all over the world who express their wish to one day visit – or even revisit – the country.

In fact, in December, Tourism Malaysia even honoured James for his efforts in promoting food and travel in the country to a global audience.

But, life goes on and judging from James’ farewell video, Dubai does look like it’s bustling with activity. The Dubai International Airport, for one, looks busy with travellers pushing airport carts and pulling their rolling bags around.

In comparison, James’ shot of a very empty KLIA is sad and perhaps, even a little upsetting.

The same can be said of Thailand’s Suvarnabhumi International Airport in Bangkok, which appeared empty and a little dark in Mark Wiens’ video in early June. Like James, Wiens is a popular travel and food vlogger, and blogger.

And like James, too, Wiens has also left South-East Asia; he returned to his home country, the United States, with his wife Ying and their son Micah. However, Wiens did not state that he has permanently moved, but simply returned home to see his family Stateside. Mark Wiens enjoying a bowl of ramen on his recent flight from Bangkok to Los Angeles.

Wiens posted his “pandemic travel experience” video on June 9, but has since uploaded three new videos of him travelling around Arizona, eating plenty of Mexican food and delicious-looking barbecued meats.

In fact, even his travel video sees him eating quite a number of times before and during his 15-hour journey to Los Angeles – with a stopover in Narita, Japan – on All Nippon Airways or ANA.

If Malaysia Airlines’ recent ASMR (autonomous sensory meridian response) video of a flight to London made you miss travelling, then Wiens’ video will make you miss … airline food.

Sure, many of us will scoff at the idea of missing or even eating airline food, but after more than a year of not travelling, Wiens’ video of him polishing off his meals while flying sure does give you the feels, as the kids say today.

Let’s hope we all get to experience this ourselves, soon.

The perfect storm for gold

All COVID-19 travel restrictions removed in the UK

A Jewish girl was saved by a Ukrainian family during World War II. Now her grandchildren are returning the favor....