OPINION: The homophobic rapper, who once boasted about offering to pay a sex worker to pleasure his 14-year old son, is now targeting the rising queer artist as a flawed scapegoat to protect youth. 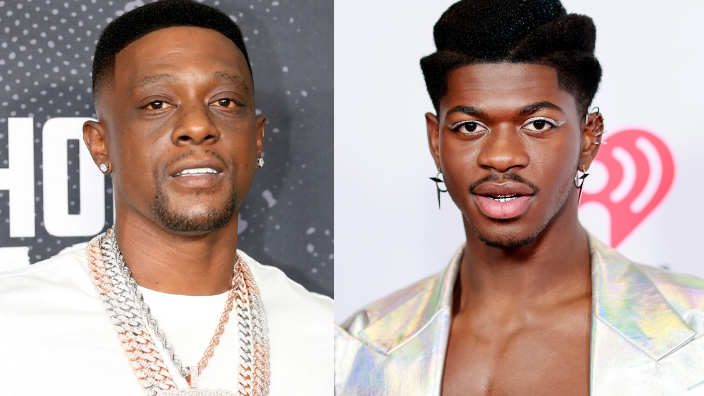 Another day, another unnecessary time for Boosie Badazz to show how he can’t help but have Lil Nas X’s name in his mouth.

After previously threatening in July that would “beat his ass,” the “Independent” rapper continues to target the queer musician. In a bizarre tweet posted early Friday morning, Boosie suggested that he thinks Lil Nas X is “going to turn around n suck one of his back ground dancers” on national TV. It should be noted that Boosie’s reactions typically occur when Lil Nas X garners press for expressing his queerness via his art or speaks on the homophobia he experiences in the industry.

Boosie is reactive, often referencing the need to “protect” children from homosexuality as a flawed scapegoat to constantly target a 22-year-old rapper that’s not even thinking about him.

It would be easy to call out Boosie’s “protect the children” defense when he once flexed that he offered to pay a sex worker to perform oral sex on his 14-year-old son — or how he’s currently banned from Instagram for constantly having pornography on his page (that could have easily been viewed by underage followers). But with the hypocrisy glaring, it’s clear that this isn’t about protecting children on seriously calling for meaningful censorship — but about a man obsessed with the liberation of an unapologetic queer man.

What’s even worse is that Boosie’s behavior is only being enabled by current Black celebs and media that seem more interested in gassing up the harassment than protecting.

“I’m with freedom of whatever, but at this point Lil Nas X fu***** with the minds of kids,” Chappelle’s Show comedian Donnell Rawlings posted on Instagram featuring a viral image from Lil Nas X of him being “pregnant” while promoting his upcoming album MONTERO. “What are your thoughts, how do I explain this s*** to my son?”

Short answer: Perhaps the same way you would explain how other grown adults do things that’s not meant for children everyday…like a lot of the explicit skits you did on Chappelle’s Show.

Again, this isn’t about the kids, it’s about silencing, targeting, and further marginalizing an out rapper who doesn’t mind standing up for himself.

Double-downing on their history of tolerating blatant homophobia and transphobia on their show, The Breakfast Club thought it was a great idea to have Boosie on their show last month as a special guest to delve further into his threats against Lil Nas X.

“I gotta speak up because as far as straight people in the world, you don’t have any opinion no more on sexuality. Everything is harm,” Boosie argued on the show when asked by the co-hosts about his homophobic rants on Lil Nas X’s BET Awards performance, where he previously said that if he saw the rapper perform naked at an awards show, he would “drag his ass offstage and beat his ass.”

Of course, co-hosts Charlamagne Tha God, DJ Envy, and Angela Yee will act like this is just them asking Boosie questions and getting answers. But what was the point? How is this not a tacky attempt to fuel the controversy and put a more concentrated target on Lil Nas X’s back? It’s not like this is anything new for a rapper that’s been attacking Black LGBTQIA people online for a while.

Last year, he came under fire when he came for NBA legend Dwyane Wade for embracing his young transgender daughter Zaya, by telling him “Don’t cut [his child’s] f—ing d–k off.” At this point, Boosie is choosing to come for Lil Nas X’s sexuality in ways that is blatant sexual harassment. Regardless of what his personal opinions are about Lil Nas X, he’s not entitled to consistently violate him in public by debasing him with graphic language.

How does he not see that the references he’s making about Lil Nas X online isn’t problematic for kids to see? Since he’s pretending to be so damn concerned about them.

At the end of the day, hip-hop and those who cover it would do everyone a favor by not treating homophobia, sexual harassment, and violence toward the LGBTQIA community as a running joke or something to egg on. Time’s been up for this kind of behavior. Stop saying Black Lives Matter if you’re going to continue to further invalidate the lived experiences of those within our community fighting for freedom. That includes our LGBTQIA siblings like Lil Nas X and Zaya.

Put some respect on their names, too.

Ernest Owens is the Editor at Large of Philadelphia magazine and CEO of Ernest Media Empire, LLC. The award-winning journalist has written for The New York Times, NBC News, USA Today and several other major publications. Follow him on Facebook, Twitter, or Instagram and ernestowens.com.

Have you subscribed to theGrio’s “Dear Culture” podcast? Download our newest episodes now!